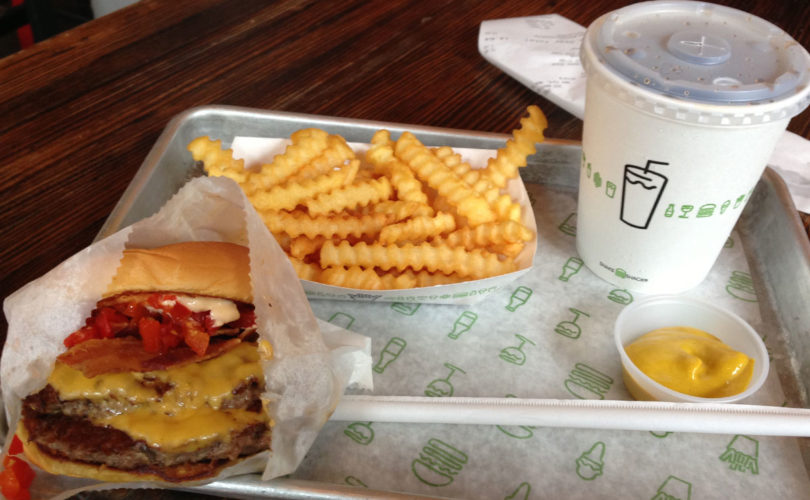 Shake Shack feels like a miracle. In Mayor Michael Bloomberg’s ongoing war on fat and sugar, the restaurant chain keeps growing and growing with its simple and greasy menu of burgers, fries and shakes. In a city known for its gourmand tastes and where you’re just as likely to find a hamburger joint which “deconstructs” burgers and reconfigures them into freeze-dried dollops on a sushi roll, the idea of a simple burger originating from a hot dog cart in Madison Square Park taking the east coast by storm seems unlikely.

But here stands Shake Shack, the east coast answer to In-N-Out, Culvers and other regional burger behemoths. The lines outside of any location can last for an hour and it’s all-out warfare to get a table. But if you’re patient, you will be rewarded with a single or double burger, possibly with ShackSauce, bacon or chopped cherry peppers. Don’t forget one of their thick shakes or custards that will reaffirm your faith in the power of sweets.

Feel bad about ingesting such delicious greasiness? Shake Shack only uses beef that’s vegetarian-fed and humanely-raised, local ingredients for toppings, operates its facilities with recycled/sustainable materials and 100% renewable energy. Vegetarian or vegan? Try the ‘Shroom Burger a fried portobello masterpiece. Can’t bring your doggie into the restaurant? The Shack offers doggie treats and custard to assuage any hard feelings from your pooch.

Be prepared to wait in line. This isn’t exactly a hidden gem of the city. However, the wait is worth every mesmerizing bite of burger and sip of shake. There are several locations throughout New York, and the empire has also expanded to include much of the east coast and outposts as far flung as Dubai, Istanbul and London. Check the website for locations and operating hours.

New York might be historically known for its pizza, but Shake Shack (which hasn’t been open for a full decade yet) is cementing its legacy among New York’s food elites.