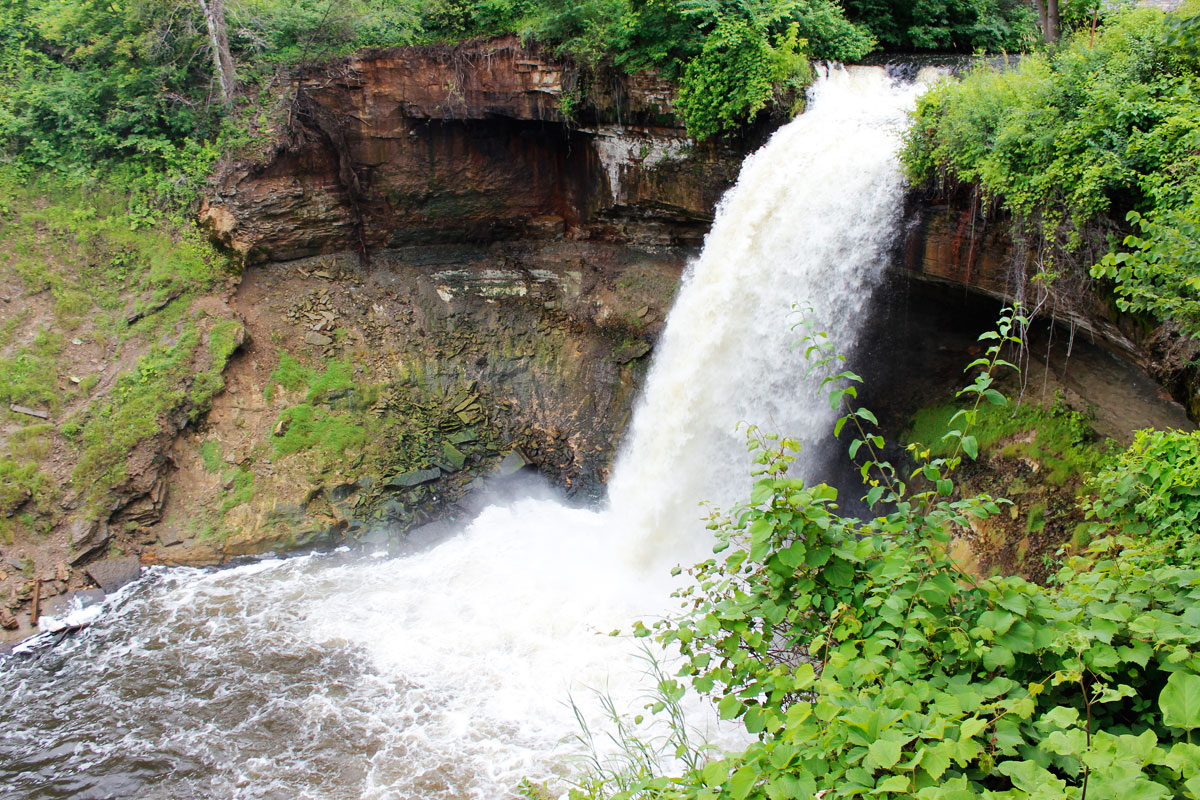 Minneapolis is a unlike any other large city we’ve ever visited. It’s a city that truly loves nature and integrates it into the very fabric of its urban infrastructure. You can ride your bike around the entire city by following the Grand Rounds scenic byway. Its lakes are clean and clear with excellent beaches, and the Mighty Mississippi looks more like a crisp northern river than the Big Muddy. Nowhere is this urban integration more apparent than in Minnehaha Park, which oscillates between pleasure grounds and deep forest, and is home to the legendary Minnehaha Falls, which have captured my imagination since I was a child.

You see, when I was a kid, my grandma gave my brothers and me an old portable record player and some records that my dad and his sister listened to when they were children. Some were 45s — I remember listening to “Sugar, Sugar” by The Archies over and over and over again* — and some were Disneyland Records, which were proto-audiobooks from the 60s. My favorite Disneyland Record was The Story of Little Hiawatha, which opens with an incantatory description of the hero’s path down a river and through the falls of Minnehaha. Those particular hypnotic syllables, min-ne-ha-ha, stuck in my head, and ever since, I’ve wanted to visit the falls.

I finally got my chance this year on our trip to Minneapolis, and even though I had built up the idea of Minnehaha in my head over the years, the reality was even more awe-inspiring than my imagination. The falls cascade from a bubbling creek over a limestone ledge and tumble over 50 feet into the gorge below. Verdant wooded paths take you over and around the falls for plenty of viewing opportunities. If you get tired of taking in the falls, you can hike along the creek and through the woods on over 9 miles of trails. You can visit Longfellow House, a 2/3 scale replica of Henry Wadsworth Longfellow’s home in Cambridge, Massachusetts. (He never saw or visited Minneapolis, but he did write an epic poem called the Song of Hiawatha which name checks Minnehaha Falls.) The home was built by a super-fan in 1907 and was given to the city in the 1930s. After all of this nature, grab a bite to eat at the fabulous Sea Salt restaurant, located close enough to the falls that you can hear them roar as you enjoy fish tacos. All in all, visiting Minnehaha Falls underlines what makes living, working and playing in Minneapolis so special.

Open daily, from 6am to midnight year-round. (Fair warning: the falls freeze in winter.)

Visit Minnehaha and see for yourself why Minneapolis is the “City By Nature.”