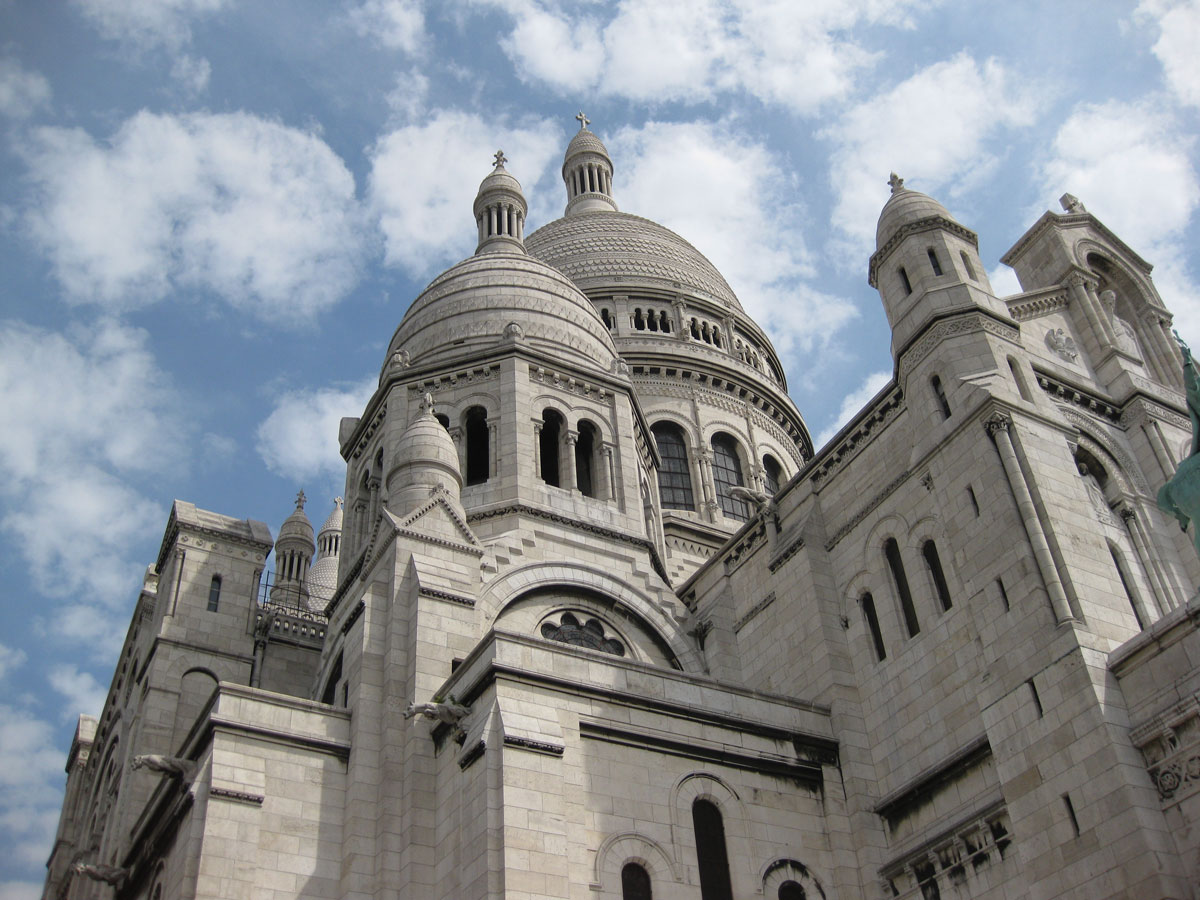 The Basilica of the Sacred Heart

You probably know that the most tallest and most visible structure in Paris is the Eiffel Tower, but the second? That would be the Sacré-Cœur Basilica on top of Montmartre.

There it is…see it? Shimmering in the distance, like a wedding-cake mirage on the northern edge of the city.

Montmartre is the name given to both the 18th arrondissement and the hill within it. Montmartre the neighborhood is perhaps best known for being the epicenter of Bohemian naughtiness during the 1800s, when it was home to Picasso, Talouse-Latrec and Matisse among others, as well as the location for infamous nightclubs such as the Moulin Rouge. Today it less seedy, but still popular and, much like the Moulin Rouge, filled with tourists.

Montmartre the hill has a much longer, storied and sordid-in-a-different-way history. Druids, Gauls and Romans all worshiped on the mountain. Originally designated Mons Martis by the Romans, the name eventually morphed into Montmartre or “Mount of the Martyrs.” It is here that St. Denis, the patron saint of Paris and the city’s first bishop was beheaded (Paris has a long history with this particular brand of capital punishment). Over time, other Christians would be killed here, earning the hill its name and its importance in the Christian Church. In fact, Christians built a series of churches where Sacré Cœur now stands, and even though Sacré Cœur gives the impression of permanence and great age, it was built between 1875-1914.

The idea was to build a church to honor those that died in Franco-Prussian war (and as an atonement for the sins of the country that led to the war). Built in Romano-Byzantine style, its white domes are instantly recognizable, but at the same time don’t seem to be typically Parisian. The church itself seems like it’s been airlifted out of 1001 Nights by way of Rome, or maybe it’s more like a nun wearing a Christian LaCroix wimple, in which case, maybe I’m wrong, and it’s actually completely Parisian.

In any case, a trip to Paris is incomplete without a visit. Don’t miss the impressive and solemn interior. The light coming in through the windows shines on the white pillars, and the mosaic in the apse is something you have to see for yourself. Gaze at the city from the top of the steps, or climb up to the top of the dome for an even loftier look at the city of lights.

The basilica is open from 6am  to 10:30pm daily, but the dome is only open from 9.00am to 7pm (6pm in winter). The quickest way to get here is to use the Anvers metro stop and walk north for two blocks to the funicular station. The funicular uses a regular metro ticket and will carry you and your weary legs to the top of the hill. If you think your legs are up for it, there are stairs than run alongside the funicular that are always free. For a much less touristy option, take the metro to Lamarck Caulaincourt and meander through the streets on the quiet side of Montmartre, free from souvenir shops